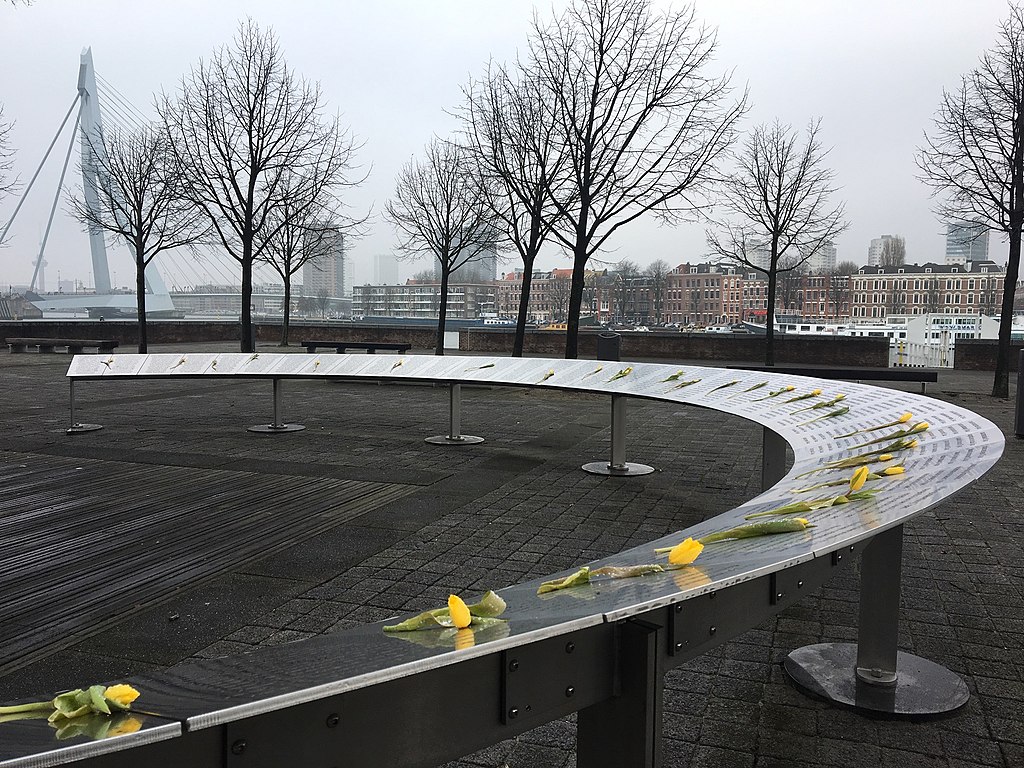 Each year, since the mid-1920’s, the Scots International Church Rotterdam hosts an annual Peace Service on Remembrance Sunday.

Joost Pot – retired auxiliary minister of the Church of Scotland and long-standing member of this congregation – reflects on his war-time experiences and our abiding need to pray and work for peace.

I remember, I remember,
the house where I was born

I remember. I was ten years old when the war started in the Netherlands on the 10th of May 1940. On that day, without warning, in the middle of the night, the Germans invaded our country. The fighting only lasted 5 days; the German army and air force were too powerful and overwhelmed us. Many Dutch soldiers were killed, and, after the bombing, the centre of Rotterdam was on fire for days. When the government and royal family left the country, the war went on from London with the Royal Navy (also around the former Dutch East Indies).

Please, not that tune

It was not easy in the war to live under an unloved regime. Most Germans knew very well that they were hated. To show their power and impress the population, the solders marched through the streets, singing. They had a complete repertoire of songs full of fighting spirit, sung to their own German tunes. One of these tunes was a Croatian composition by Franz Joseph Haydn. This same tune has found its way into English hymn books as the tune for John Newton’s wonderful hymn, ‘Glorious things of thee are spoken’. Now you understand why older Dutch church members have difficulty singing that hymn (tune).

The German occupation lasted 5 years. When they capitulated, they left the Netherlands in chaos, with hunger and starvation, people being executed in reprisal or punishment, the Jewish population almost completely murdered, and so on.

I remember May 1945 when the Germans capitulated; we were free but I knew of many who had been killed, never to come back. That was the start of local Remembrance ceremonies and speeches. We vowed we would all tell the younger generation, ‘Never again war’. But younger generations in some countries are not listening; they glorify war, it seems.

I remember the stories I heard from people who survived the concentration camps and other awful things. What war does to people is terrible, humiliating and cruel. The Bible tells us that a time will come when war will be studied no more and swords will be transformed into ploughshares and the spears into pruning hooks. (Isaiah 2:4) Jesus taught us to love our enemies and he did not condemn those who crucified him. He taught us to forgive . . .

I married Marion in Edinburgh in 1961, and we moved to Ridderkerk (15 minutes’ drive south east of Rotterdam centre) and found our way to the Scots Church in Rotterdam. Like many churches in Britain, we have a Remembrance service on the Sunday closest to 11 November, with a bugler and piper. That same evening we hold our annual Peace Service.

In reference to this long-standing tradition, Mrs Jean Morrison, a minister’s wife, writes in her book, Scots on the Dijk (1981):

“Dr Brown’s abiding legacy to the church is the annual United Service for Peace, an idea, stemming originally from a conference in Stockholm in 1924”.

In this service clergy from different nationalities and churches in the city of Rotterdam are invited to take part in their own language, so underlining the international prayer for peace. The service has a special atmosphere and is very inspiring.

As the annual day of Remembrance approaches, we pray for the survivors of war. This is the time that they think of all that has happened – the destruction, their fears, the tragedy, the cruelty, asking why? It all comes back: the pain, the loss. It looks as if their scars get deeper and deeper. Is there no healing for those who once were the brave ones? But You are the Everlasting, the God of Peace, goodness and healing of all the wounds. When will our friends get rest?

Yet, we must confess the shortcomings of the world; its pride, its selfishness, its greed, its evil divisions and hatred. Yes, we must confess our share in what is wrong, and our failure to change things for the better.

Jesus said, “Blessed are the peacemakers, for they will be called children of God”. Lord, we pray for all who are united in their passion for peace, justice and righteousness.

Lord grant us Your Peace.
Through Jesus, our Lord and Saviour.
Amen.

This site uses Akismet to reduce spam. Learn how your comment data is processed.

The Gift booklet : a 12-part series of readings
and prayer poems on the Holy Spirit

It’s my privilege as Presbytery “Prayer Promoter” to prompt and resource prayer in our Presbytery and beyond.

Where prayer is concerned, we are all learners. I hope the posts and pages on this website will help you and me enter more fully into the adventure of a prayerful life.